I really miss the two enormous rhubarb patches that my parents had in their garden.  My mum made lovely rhubarb pies and crumbles and once I had left the family home I would be given armfuls of rhubarb to take away with me so that I could make my own. 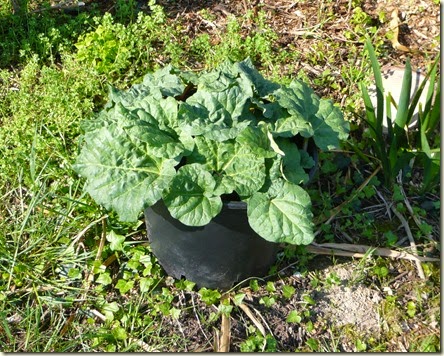 A cutting of the family rhubarb plant has followed me to France.  It’s growing well in the pot we brought it over in and now needs to be planted out in our French garden, which unfortunately doesn’t look much like a garden at all. 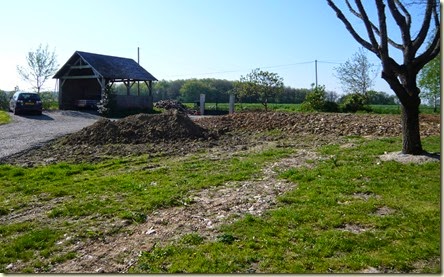 It looks like a war zone after the installation of the new fosse septique.  The construction work followed by weeks of rain followed by a long dry spell has left a mountain of boulders, some of rock and some of earth that is now hard as nails, most of which is clay.  Ten tons of topsoil delivered two weeks ago lie undisturbed in a pile at the edge of the garden, waiting to be spread over the tilled earth – after we get round to tilling it.  Kitchen construction work has taken priority and garden work has been put on the back burner for the time being. 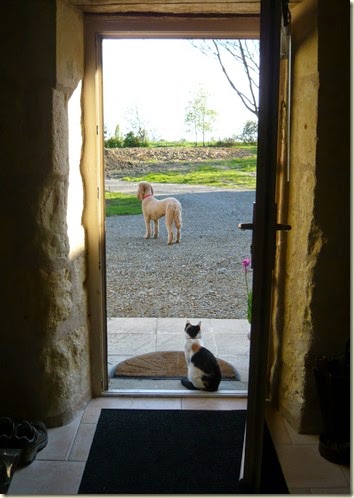 Meanwhile our rhubarb continues to grow happily in its pot, waiting to be transplanted to its permanent home. 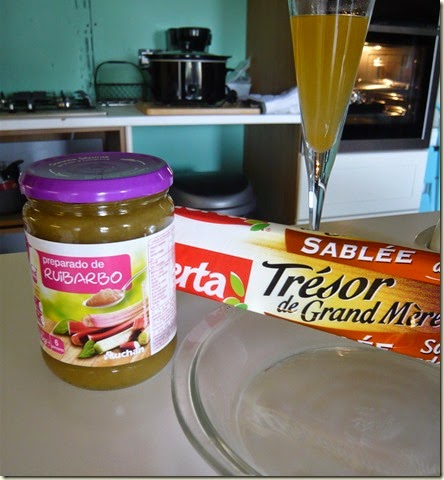 We are big fans of the apple compote you find on French supermarket shelves, using it mainly to put on our breakfast cereal.  Recently I spotted a jar of rhubarb compote and decided to try it for a change.  In fact it was so delicious that I thought I could use it to make a crumble – the compote looked much more like stewed rhubarb than a completely smooth compote and also had some added sugar, making it an ideal filling.  With plenty of eggs in the kitchen the idea of a meringue sprang to mind.  I also had a pack of ready made pastry in the fridge, perfect for the job.

With our kitchen still being work in progress, baking dishes and ingredients are spread all around the rest of the house.  I went in search of a tart dish or tin but after a bit of rummaging I unearthed instead my ancient Pyrex pie dish.  This was part of a Pyrex starter set bought when I first set up my own home in 1972.  A pie dish, mixing bowl, measuring jug and, if I remember correctly, a pudding basin.  The only piece that has survived the decades and numerous house moves is the pie dish, which must have been used for scores of apple pies.

I used the Be-Ro  book recipe for lemon meringue pie to make the meringue, putting one of the unused egg yolks into the rhubarb mixture, for no other reason than that I thought it seemed like a good idea. 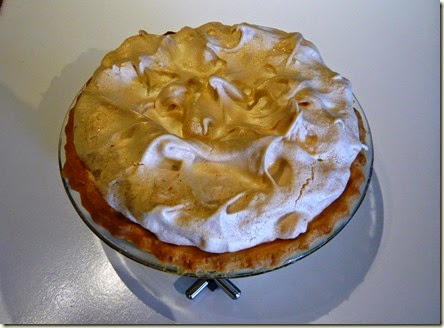 The result was a very quick and easy to make dessert that I will definitely be making again.  The rhubarb compote is a real find but of course in future I hope to use my own stewed rhubarb, and possibly the numberous variations on a theme just waiting to be tried: rhubarb with orange, strawberry or ginger would all go well in a meringue pie.

The meringue was crisp on the outside, soft, sweet and marshmallowy in the inside.  It worked really well with the sharpness of the rhubarb.  The only change I would make next time is to maybe put both egg yolks into the rhubarb filling and because it was a bit runny, maybe add a little cornflour to stiffen it slightly. 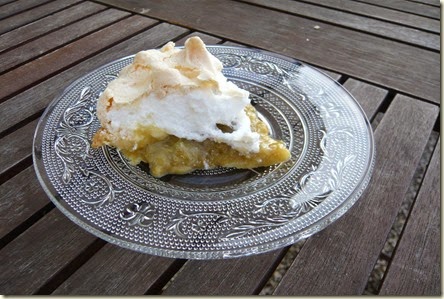 To make the meringue (while the pastry is cooking), whisk the egg whites to the stiff peak stage, add the sugar a spoonful at a time and whisk into the egg.

Stir the egg yolks into the rhubarb compote and mix well.  Remove the baking paper and beans from the pastry case and spread the rhubarb mixture evenly over the base.

Spoon the meringue mixture on top of the fruit layer, starting at the outside edge so that there is a good seal and no gaps.  Reduce the temperature to 150°C / 130° fan and return the pie to the oven. Bake for about 25 minutes until the meringue is crisp and golden.