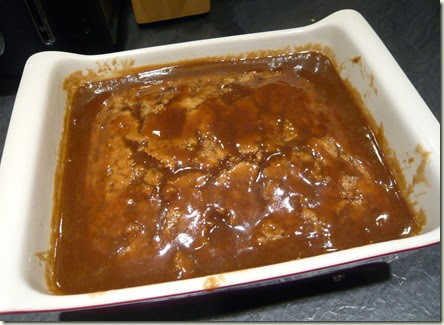 The other weekend I was feeling the need to bake something.  Not just any old thing but something really indulgent and wicked.  The post Christmas abstinence from baking and sweet stuff had caught up with me and I was having serious withdrawal symptoms.

However, I couldn’t be bothered to drag myself to the shops in the horrid weather – we were out walking our dog Lulu when I announced my urge to Nick and there was a bitterly cold wind stinging our faces.  Thinking about what we had in our cupboards at home that I could use, I mentioned sticky toffee pudding, something I have never actually made before, and Nick’s eyes lit up.  He often orders it when we go for a meal out so I knew he would be pleased.  I then said “I think we have a pack of chopped dates somewhere” and he looked rather less pleased.  He doesn’t like dates, apparently.  Something else I hadn’t known about him for the last twenty years!

Now I’m pretty sure that most sticky toffee puddings do contain dates but he assured me that the one he normally gets at our favourite restaurant absolutely doesn’t.  Hmmm…….  Maybe the dates are so squidgy that he doesn’t realise they’re there.  Anyway, I found myself consulting my cookbooks and eventually the internet for a recipe for a dateless sticky toffee pudding and found this one on the allrecipes website. 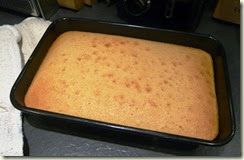 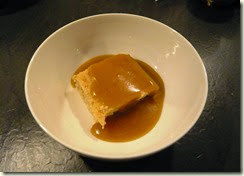 I followed the recipe exactly – it wasn’t difficult – and ended up with a nice sponge over which was poured a lovely toffee sauce.  The sauce was delicious but overall the pudding was just ok.  Not sticky enough for either of us and disappointing having read some of the reviews of the recipe.

Then I read further down the reviews and spotted that someone else had found a similar recipe in a blog here but with an interesting difference. 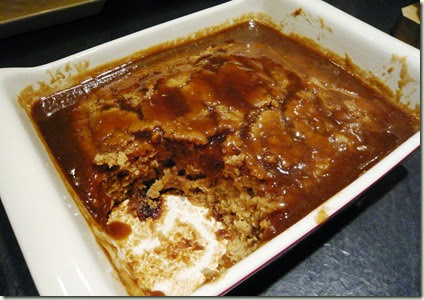 Instead of serving the sauce with the pudding, on removing the sponge from the oven you had to prick it all over, smother it with the sauce rather like a lemon drizzle cake, and let it seep into the cake.

Now this was much more like it!  What a transformation from the rather dull to the incredibly wicked and indulgent!  It was very, very sweet but totally gorgeous and I will most definitely be making it again – but not too soon………

Sift the flour, salt and baking powder into a large bowl.  Add the sugar and mix well.

In another bowl whisk together the milk, eggs, vanilla and melted butter, until a light frothy foam appears on top.

Add the liquid to the flour mixture and mix together until smooth and well blended.

Pour into the baking dish and bake for 20-30 minutes until the the sponge is firm and golden brown.

While the sponge is baking, make the sauce by putting all the ingredients into a large saucepan and heating gently, stirring all the time, until smooth and dark brown.  Set aside to cool slightly until the sponge is done.

When the sponge is cooked, remove it from the oven and prick all over with a skewer or fork, going right through to the bottom of the cake.  Then pour the toffee sauce over it to allow it to seep into the sponge.  There will be plenty of sauce left over to serve separately with the pudding.

Serve warm with the reserved toffee sauce, plus cream or ice cream for that extra indulgence – might as well be hung for a sheep as a lamb as my dear mother used to say !!