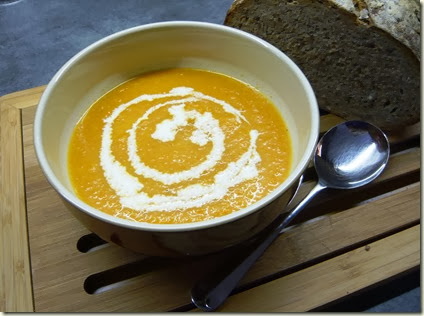 Cooking has been somewhat chaotic at home lately, largely because we have spent more time sorting our belongings and cleaning than we have shopping.

Once the agent had been and taken the photos of the house for the website we were able to sit back and take a breather.  Also to take stock of what we had in that we could eat.  Inspection of the veg drawer revealed quite a lot of carrots but not much else.  Nick was feeling in need of baking some bread (therapeutic kneading) so we decided to treat ourselves to home made soup and bread for lunch the next day. 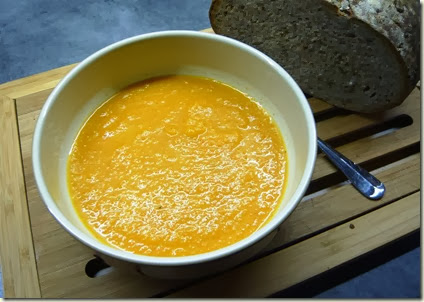 The recipe comes from a slim volume of the “Best Kept Secrets of the Women’s Institute” series of books and is actually described simply as carrot and ginger soup.  The orange flavour actually comes through quite strongly so I have re-named it for myself.

To be truthful, I didn’t have any oranges but there were two largish clementines in the drawer so I used those. 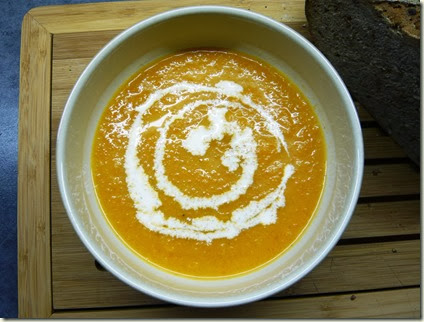 It’s quick and easy to make, a glorious colour and, like all home-made soups, immensely satisfying.  Eating a bowl of home-made soup is always such a tremendous pleasure.  It tastes a million times better than the tinned stuff and even the carton stuff.  Knowing that it has been rustled up from a few leftovers makes me feel very virtuous too.

It’s gluten free if you use home-made vegetable stock or a gluten free stock powder such as Kallo or Marigold.

the zest and juice of 1 medium orange (or 2 clementines)

800ml vegetable stock (made from a stock cube or powder)

Bash the knob of ginger to crush it and put it in a pan with the carrots and stock.  Bring to the boil and simmer for 15 minutes.

While the carrots are cooking, put the sliced onions into a large pan with the butter or oil and fry until soft.  Stir in the ground ginger and orange zest.

Remove and discard the piece of ginger from the carrot pan and pour the carrots and stock into the onion mixture.  Bring back to the boil and simmer for 10 minutes.

Allow to cool slightly then purée the soup either by transferring to a food processor or by using a stick blender in the pan.  Blitz until the soup is the consistency you like.  If it seems a little thick, thin it with a spoonful or two of water or milk.  Season to taste.

Add the orange juice and reheat.  Add a swirl of double cream if you like before serving.