I have been baking quite a few frangipane creations lately and this is another one.  In fact I have made a pear and almond tart to Laura Washburn’s recipe quite happily many times ~ I wrote about it here.  Then I stumbled across a different version by Michel Roux which appeared in the Metro and you can see it here.  I liked the sound of it because you cook the pears in a vanilla and cinnamon flavoured syrup so I decided to have a go. 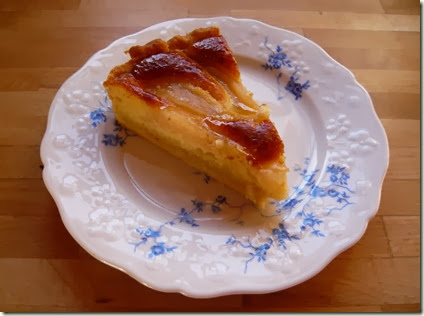 As usual, I didn’t stick exactly to his recipe!  I didn’t have a vanilla pod so omitted it.  I didn’t use his recipe for making the pastry as I am really happy with the Mary Berry sweet pastry that I have made several times recently and used that instead.  I also used Amaretto in the frangipane topping instead of rum. 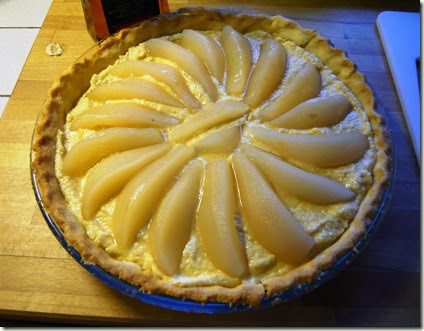 I expected the step of poaching the pears to be a bit of a faff but it wasn’t.  While they’re cooking gently you can get on with the pastry and almond topping, which is no bother at all.

I used four large pears but that produced too much for the tart so I put the leftover slices in the fridge with the poaching syrup and served them separately.  They were yummy too and we had the last few slices with some yoghurt for dessert a couple of days after the tart had all gone. 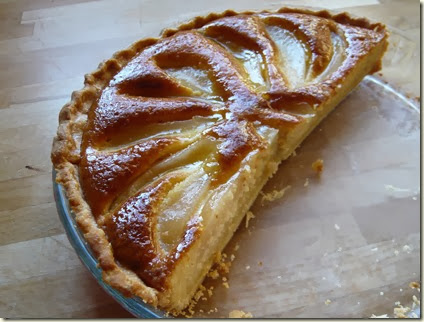 I was convinced I had taken a photo of the finished tart but apparently not so this one of half of it will have to do!  I glazed it with apricot glaze but didn’t scatter any flaked almonds on the top ~ I thought it looked better without.

(Curiously, although this scattering of flaked almonds is mentioned in Michel’s recipe, you can see clearly from the photo in the article that he didn’t either.) 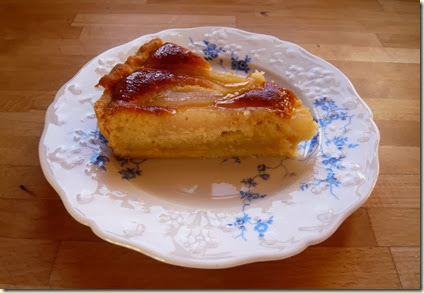 This is a stunningly good dessert and excellent served cold with a cup of tea too.  The almond topping is delicious and looks very chic with its shiny glaze.  I gave a slice to our French neighbour, Mme André and she loved it, which is always a good sign! 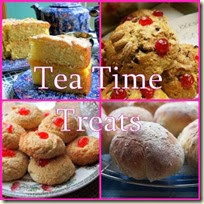 I am submitting this post to this month’s Tea Time Treats Challenge, hosted by Karen at Lavender and Lovage and this month Janie at The Hedgcombers blog.  The theme this month is eggs, eggs, eggs!  As the almond topping does indeed contain three eggs it seems to fit the bill!

I am also dedicating it to my friend Elizabeth over at Braye-sous-Faye.  She has to have a gluten free diet and has always struggled with producing good pastry ~ until now!

This pear and almond tart could probably be easily adapted to a gluten free version because it has no flour in the topping, and if you follow Elizabeth’s instructions for the pastry, which you can see here.  I dare say you could even make a sweet pastry version by adding a little icing sugar to the flour and combining it with egg à la Mary Berry!  (It might be worth a try anyway!)

For the poached pears

For the almond topping

125g softened butter or spreadable butter such as Lurpak

Put the pear halves in a large saucepan with the water, sugar, cinnamon stick and vanilla pod (if using).  Bring slowly to the boil and simmer gently for 20 minutes until the pears are tender.  Drain the pears and leave to cool.  (Discard the spices but reserve the liquid for another purpose if, like me you hate to waste it.)

Make the pastry by blitzing the flour, icing sugar and butter in a food processor.  Use the beaten egg to combine it then wrap in cling film and chill in the fridge while you make the almond topping.

Without washing the food processor bowl, put the butter and sugar into it and process to a cream.  Add the ground almonds and combine briefly.  Add the eggs and Amaretto and process again until well combined.

Roll out the pastry to fit the tin or dish, prick the base and blind bake for 20 minutes.

Spoon the almond mixture into the pastry case and level the top.

Cut each pear half into three slices and arrange the slices on top of the almond mixture, pointed end towards the middle.  Bake for about 40 minutes until the the filling is golden brown and passes the usual skewer test for a cake.

Warm the apricot jam in a small pan with a little water and brush over the finished tart.

Serve warm with cream or crème fraîche.  Also nice served cold with a cup of tea.