My  father turned up with a huge bag of damsons recently.  I love damsons and he loves damson pie !!  The damson tree they came from is in the garden of a house that used to belong to his parents (my grandparents).  His brother (my uncle) lives in the house next door and luckily the new owners of the tree don’t like damsons and are happy for them to be used by us.  Strangely, I’m the only person in the family who seems to use them. 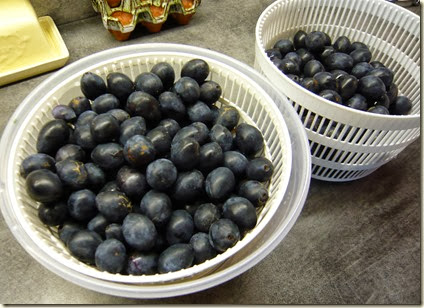 Anyway, I was looking for ideas for something to do with them other than a crumble, pie, or jam, and came across a recipe on the Good Food website.  (There’s no point in my giving the link here as it’s on of the ones that disappeared from the site on 30th September.)

However, I also spotted a recipe for “apple, cherry and marzipan pie”.  This was the one made by Ruby, the young contestant in the current series of The Great British Bake Off.  I remember at the time she put some marzipan in her pie just because she likes it and………..was this the pie that Paul Hollywood said was the best he had ever tasted?  Or was that Kimberley’s?  I can’t quite remember. 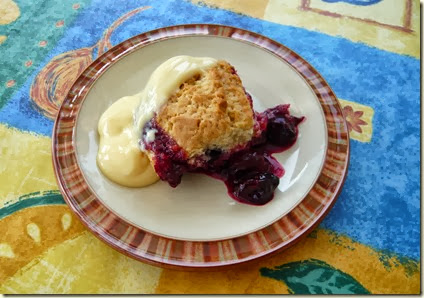 I really like marzipan too so I decided to add some to my damson cobbler.  (I also put in a few strawberries and blueberries that needed using up, but they didn’t add anything to the flavour, the taste of damsons being so strong.) 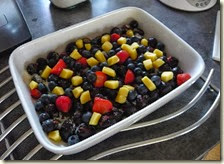 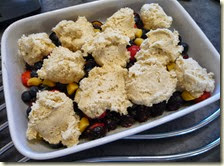 The cobbler was delicious.  That intense purple colour and the sharp, strong taste of damsons were truly magnificent.  The little blobs of marzipan added a little hint of almond in every mouthful.  I shall try adding marzipan to other pies and crumbles from now on. 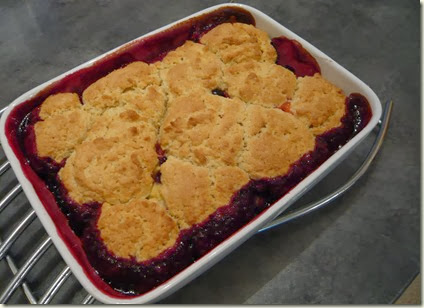 Of course the only problem with damsons is the stones.  It’s not an issue when you’re making jam as the stones float to the surface in cooking and can be scooped off fairly easily.

Every year I think I should make the effort and try to stone them before I use them in a pudding, but I always give up.  I lose the will to live after about a dozen and using either a knife or a cherry stoner seems to waste so much of the damson itself.

So I always resort to doing what my mum always did – issue a warning as you put it on the table !!  If anyone has a good method for stoning damsons I would be very pleased to hear it. 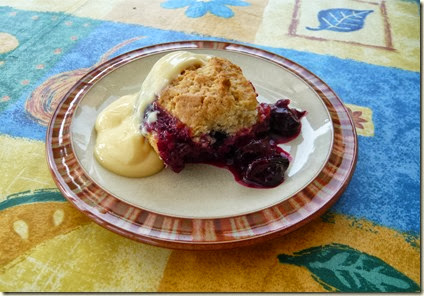 For the cobbler topping

a few hazelnuts, or cobnuts, chopped (I omitted these but almond flakes would also be nice)

Tip the fruit into the dish.  Sprinkle over the 100g sugar and put into the oven while you make the cobbler topping.

Put the butter, flour and sugar into a food processor with a pinch of salt and process to breadcrumbs.  Add the milk and process again briefly to make a soft dough.

Remove the dish from the oven and dot the cubes of marzipan evenly between the damsons.  Spoon blobs of the topping mixture over the fruit.  Sprinkle the nuts on top.

Bake for 30-35 minutes, until the fruit is bubbling and the sponge firm – test it as you would for a cake.

*I have since made the same recipe using a mixture of fruit, apples, pears, plums and nectarines.  It was delicious.  I think this recipe would probably work with any fruit, just putting a layer in the bottom of the dish…….