I was really pleased with the regular version of this cake which I made a few weeks ago.  You can see the post here.  I liked the contrast between the sweetness of the coffee sponge and the sharpness of the blackcurrant jam.  So when I was deciding what kind of cake to make for my friend Elizabeth’s birthday I settled on a gluten free version of the same thing. 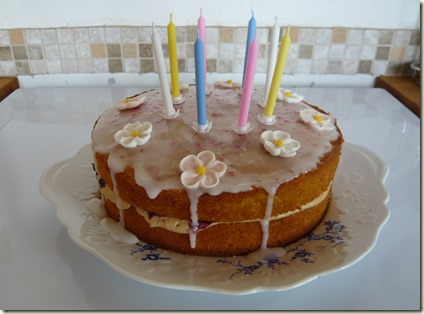 I adapted a Victoria sponge recipe from “The gluten free baker” by Hannah Miles, replacing the vanilla essence with instant espresso coffee dissolved in a little water. 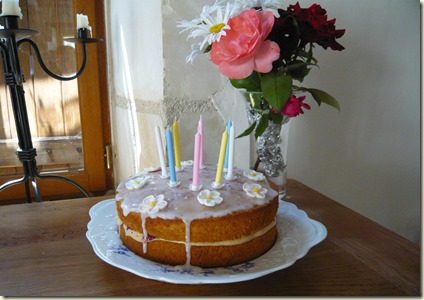 I filled it with whipped cream flavoured with more coffee and sweetened with icing sugar, plus a layer of blackcurrant jam, then decorated with some water icing and birthday candles. 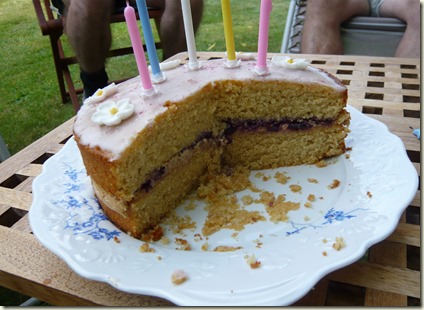 I used this recipe last year to make the cherry Bakewell cake, which you can read about here.  It produced a lovely moist and light cake and it’s proved to be a very useful, reliable and adaptable recipe.

Anyone who finds the combination of coffee and blackcurrant a strange idea could of course just omit the jam – it’s definitely not to everyone’s taste – but we like it.  And you could easily replace the cream filling with regular coffee buttercream.

This year I was baking in a heatwave so there was no problem with getting the butter to soften – just leaving it out of the fridge for an hour did the trick.  The only problem was in transporting it on bendy roads for 50 minutes – the top layer started to slide off the bottom layer as we rounded a bend but a gentle shove was all that was needed to replace it!

½tsp espresso powder, dissolved in a little of the cream

Divide between the two tins and bake for 25-30 minutes until the cakes are firm and golden and pass the skewer test. Remove from the oven, turn out and cool on a wire rack.

Whip the cream until firm and spreadable. Add the coffee powder and one tablespoon of icing sugar and blend in.  Spread the jam onto the base of one of the sponges.  Invert the other sponge onto a cake plate or stand and spread the whipped cream onto it.  Invert the jammy one on top.

Sift the rest of the icing sugar into a bowl and add water, a teaspoon at a time, and mix together until a runny icing is formed.

Spoon the icing onto the top of the cake, spread out evenly, allowing to drip down the sides if you like.  Decorate with birthday candles, sugar crystals, sugar flowers and anything else you fancy!

Cuts into 10-12 slices. Keep refrigerated because of the fresh cream.