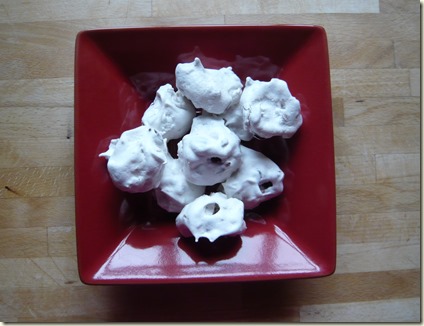 I was looking at a couple of spare eggs in the egg basket late one evening and remembered this recipe which I had seen on the Good Food website a while ago.

The “late one evening” bit is the point, as these are essentially little meringues which you whisk up and put in the oven, then you turn the oven off and can leave them or “forget about them” until the next day. 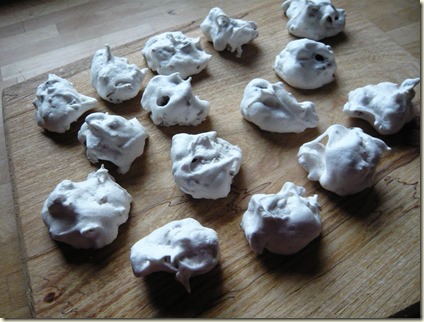 As far as I can remember, this is the first time I have ever made a meringue, other than the sort you would put on top of a lemon meringue pie.  They turned out well, crisp on the outside and chewy inside, with nice little bits of nut and chocolate to surprise you as they melt on the tongue.  I also liked their rather rustic appearance and they are of course gluten free. 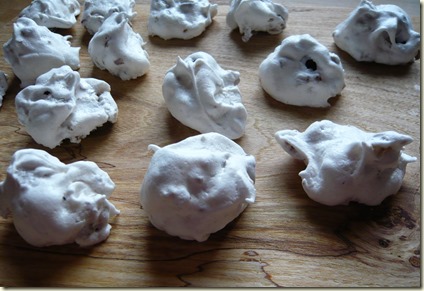 Some of them had nice hard, dry bottoms, which is how they should be I think.  Others were a bit gooey on the bottom and more difficult to remove from the baking sheet without falling apart.

I suspect this might be due to the efficiency of my fan oven in my French kitchen, which is newer than the one back home by about ten years.  I wonder if the fan that comes on to cool the oven down when you switch it off was too effective and cooled the oven too quickly.  I believe this oven has an option to turn the fan off so next time I make them I will see if I can find the instruction book (and understand the French text) and give that a try. 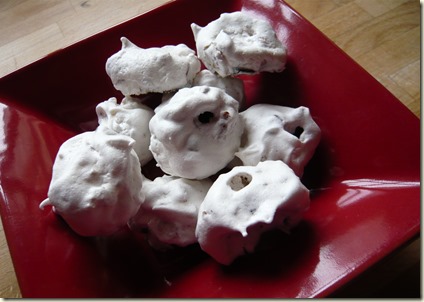 And I will definitely make them again.  I used a pack of Sainsbury’s Belgian chocolate chips and pecan nuts but I might try white chocolate and almonds next.  I also fancy making them even smaller so they could be served with an after dinner coffee.  Posh, eh ??!!

Whisk the egg whites with a pinch of salt until stiff.

Whisk in the sugar a little at a time.

Fold in the nuts, chocolate and vanilla essence.

Drop heaped teaspoons of the mixture onto the baking sheets, spaced 2-3 cm apart.  Put them into the oven and turn it off.  Forget about them for at least three hours, or until the oven is completely cold, or overnight.

Makes 30-35 cookies and they keep well for a few days in an airtight tin.