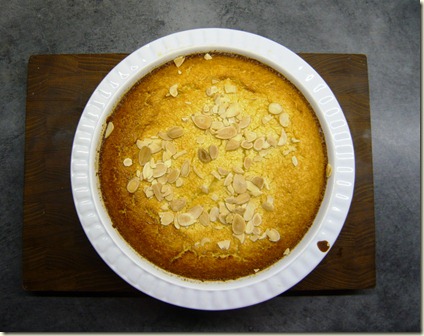 My dad came round for his dinner one evening recently, which was nice.  We don’t see quite so much of him these days, now that he eats out two or three times a week with his lady friend.  Unfortunately he had had to have a tooth extraction so lunch out had been cancelled and he was feeling a bit down in the dumps.

I decided to cook something which would be easy to eat and not require too much chewing, so we started with my Italian sausage casserole (minus the olives as he doesn’t like them), followed by this coconut pudding. 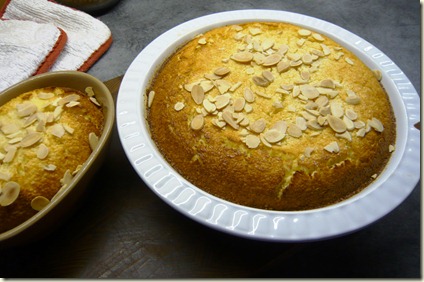 The true name of the pudding is “Impossible Pie”.  It is called this because you make a batter which separates miraculously into three layers when it is cooked – a pastry-like layer on the bottom, a custard layer in the middle and a lovely coconut crust on top.  I’ve made it before and wrote about it here but this time I used a slightly different recipe and thought it turned out even better. 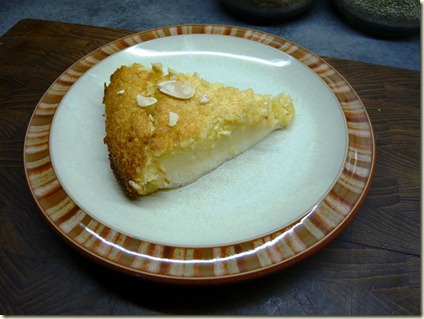 This recipe comes from a Marks and Spencer book simply called “Baking” and the major difference between this and the previous one is the addition of some flaked almonds.  I omitted the almonds from the batter itself, thinking it might be wise in view of the dental problem, but sprinkled some on the top because it would look nice.  Which it definitely did.  I also used Stork Baking Liquid instead of melted butter.  I made a large pie and a small one in an extra dish, for my dad and his lady friend to enjoy together later.

The pudding puffs up a lot while baking but will shrink back down in a few minutes.  It also sets as it cools so it is better served only slightly warm rather than too soon after it’s out of the oven, because the custard can be slightly too runny or wobbly if it’s still very warm. 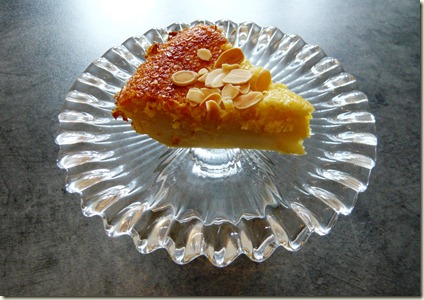 Put all the ingredients (except for the flaked almonds) into a food processor or mixer and beat together to make a smooth batter.  Add half the almonds (I left them out) and mix thoroughly.

Turn the mixture into the prepared dish and bake for 35 minutes.  Remove from the oven and sprinkle the other half of the almonds over the top.

Return to the oven and bake for a further 10 minutes or until risen and golden.

Remove from the oven and allow to cool.  Serve just slightly warm, with cream, custard or ice-cream.