I spotted a recipe in a magazine recently which was entitled “Bakewell cake”.  It was for an almond flavoured sponge with blackberries in.   It looked like a nice recipe and I happened to have some blackberries so I thought I would give it a try. 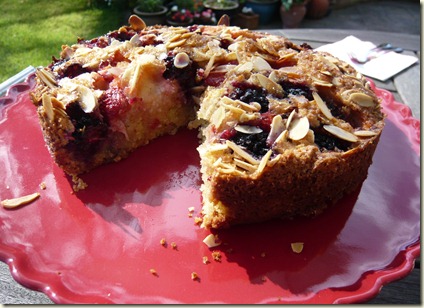 Early September is my favourite time of year.  It’s still almost summer but not quite almost autumn.  This year the weather is perfect – the days are deliciously warm and the light has that characteristically mellow golden tinge.  So much nicer than the vicious heat and harsh sun of July and August – not that we’ve had much of that this July and August.  Maybe that’s it.  We expect so little of September but it nearly always surprises us with its warmth, whereas July and August so often disappoint. 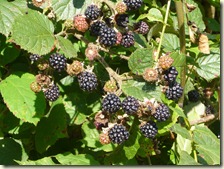 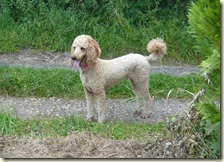 Lulu and I had been out blackberrying the very afternoon that I came across the recipe.  I collected about a pound of blackberries.  But I also had half a punnet of shop-bought ones in the fridge that needed using up.  So I decided to use those for the “Bakewell cake” and freeze my foraged blackberries to cheer us up with a crumble later in the year. 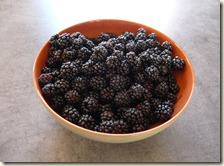 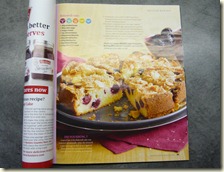 As the half punnet was not quite enough for the recipe, I added some chopped strawberries to make up the quantity.  Hence I decided to call the cake “Berry Bakewell Cake”, and it was scrummy. 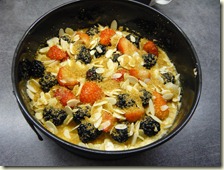 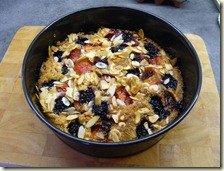 It was dead easy to make.  A simple creamed sponge mixture with the fruit, demerara sugar and flaked almonds scattered on top. 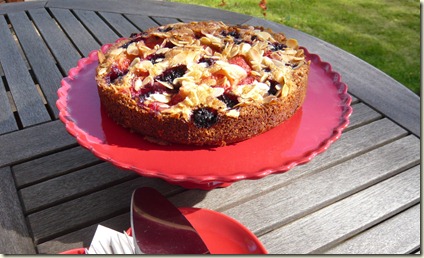 After half an hour in the oven the cake was beginning to look browned so I put a piece of foil on top of it to prevent it the fruit from burning.  I enjoyed a slice in the garden, with the gentle sunshine and a nice cup of tea. 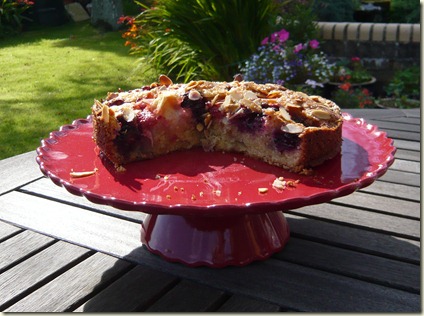 I would definitely make it again.  It had a sort of rustic sophistication – pretty enough to serve to special friends on a sunny afternoon, easy enough to make for a lunchbox treat.
The only slight change I would make to the recipe is to halve the amount of almond essence, to make the flavour balanced more towards the fruit and less towards the almonds.  More of a berry cake than a Bakewell, in fact.

1 tsp almond essence (I would suggest trying ½ a tsp)

Method
Preheat the oven to 180°C/160°fan/gas mk 4.  Line the base of a 20cm springform cake tin with baking paper and grease the sides (or spray with cake release spray).

In a large bowl, or food mixer, beat the butter and caster sugar until light and fluffy.

Transfer the mixture to the prepared tin and level the surface.  Scatter the fruit on top.  Sprinkle the flaked almonds and demerara sugar on top of that and bake for 50-60 minutes, covering the top loosely with a piece of foil after 30 minutes.

Cool on a rack.  Serve with tea and sunshine in the garden.