When we visited our friends Ken and Walt in St-Aignan in early July I decided I would bake them a cake.  I gave it lots of thought and opted for a chocolate Guinness cake baked to Nigella Lawson’s recipe. 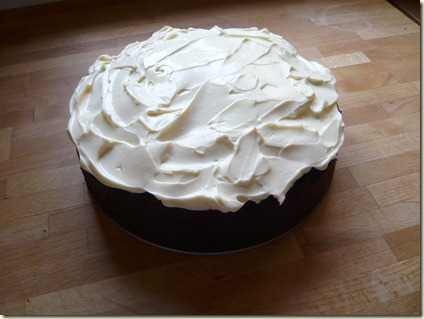 I first made this cake at least six years ago, for Nick to take to a charity cake stall at work.  It was incredibly popular.  After the first time where it sold for £1 a slice, people requested it, no, demanded it, and the price went up to £1.50 !!  So it’s a really good seller for charity.

Counting up, I have probably made this cake at least twenty times over the years but have only ever eaten maybe four pieces.  This is because when it is on sale, or on the table at a birthday party, it disappears so fast.  It somehow seemed rude for the baker of the cake to be at the front of the scrum to get a slice but by the time the crowds have gone there are always only the crumbs left !!

I once saw one on sale at a garden centre tearooms.  I first established that it had been made to Nigella’s recipe then bought a slice.  It was the first one I had eaten, even though I had made several already !!  It is delicious, a very grown up kind of chocolate cake, even thought the topping is very sweet. 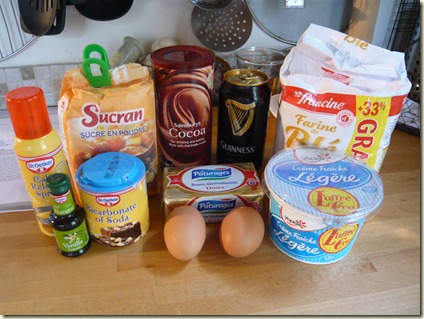 If I had thought about it in advance I would have taken a bottle of Guinness to France with me so I thought I might have to make it using one of the dark Belgian beers.  Happily I found cans of Guinness on the shelves in Auchan.  The only adaptation I made was that the recipe calls for a small pot of sour cream but I used crème fraîche instead, which, according to my food dictionary, is the same thing. 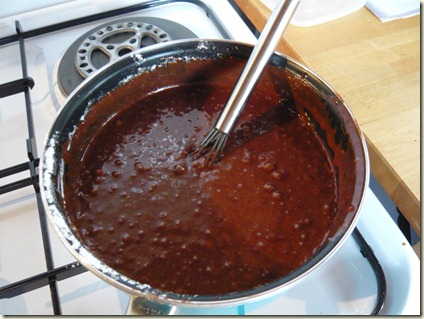 It’s incredibly easy to make.  You basically whisk all the ingredients together in the saucepan in which you melt the butter with the Guinness.  It takes a long time to bake and many times I have been unsure if it was cooked or not and been tempted to give it a few more minutes.  But Nigella advises that it is meant to be a damp cake so I have stuck to her timings and it has always turned out fine. 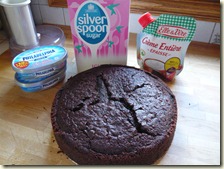 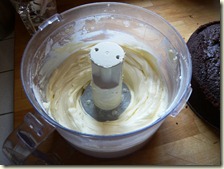 It often sinks in the middle but on this occasion it didn’t but it also cracked on the top – must be the difference between my English and French ovens I suppose. In any case, neither really matters as the topping fills in any unevenness perfectly. 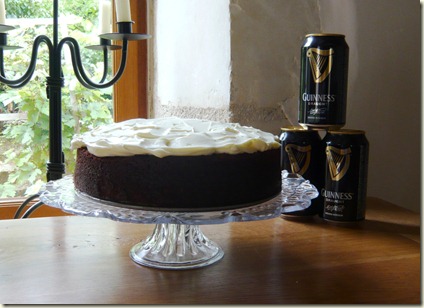 The evening before I made it we were sitting outside the PreHisto bar with our friends Chris and Gail in the sunshine, listening to the church bells, enjoying a couple of apéros whilst watching the to-ing and fro-ing of people as they made last minute calls to the village butcher and baker, and I mentioned the cake.  Gail apparently makes it regularly for her family and told me that not only does it freeze very well, it also freezes well with the topping on.  She also makes only half the quantity of the topping as she finds it too sweet.  It is indeed very sweet so I split the difference and made two thirds – it was perfect. 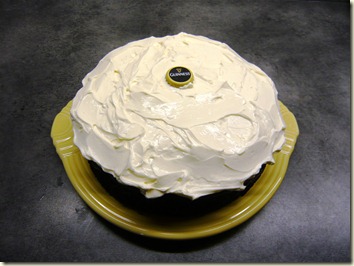 One I made earlier, with full quantity of topping.

In May I made my umpteenth “Guinness cake” by special request for yet another charity cake stall at Nick’s office.  It had the full quantity of topping and it doesn’t look quite so good as with the two-thirds I think.  I usually put the top from the bottle of Guinness on the cake as decoration but of course you can’t if your beer comes in a can, which it did in France !!

You can find the recipe on Nigella’s website here.  I also once successfully adapted the recipe to make it into cupcakes – they looked gorgeous and were yummy too. 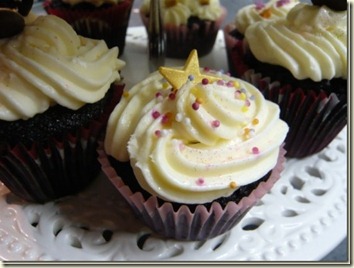 The cupcakes I made using the same recipe.

If you haven’t tried it yet I would strongly recommend this stunning cake for a charity cake stall or a special occasion.  It’s not cheap to make but it cuts into about 16 slices and is always well received.  The flavour of the Guinness does not come through as such but it makes the cake not too sweet and makes it look fabulously dark.  The topping adds just the right amount of sweetness.  It is without doubt my favourite cake recipe.

I am linking this post to this month’s Forever Nigella event, hosted by Karen at Lavender and Lovage.  Fridge Raider Snacks !!  I always like the bit at the end of Nigella’s cooking programmes where she would sneak something from the fridge before she put out the lights and went to bed !! Sarah from Maison Cupcake started the whole Nigella Forever thing and I have been dying to enter for ages.  I use a lot of Nigella’s recipes and regularly take her books for bedtime reading !!

This recipe fits the theme perfectly I think.  Assuming there is ever any left over, which is unlikely in a way but then if there are only two of you to eat it……….. !!  It has to be kept in the fridge because of the cream cheese topping and I defy anyone to stay away from that fridge door when it’s in there !!  I can just imagine Nigella in her silk dressing gown, sneaking into the kitchen, dipping her finger into the icing………..myself, I would be in my favourite shabby pyjamas, towelling bath robe and which ever pair of shoes or trainers that were nearest………not quite the same image, but it’s the thought that counts !!