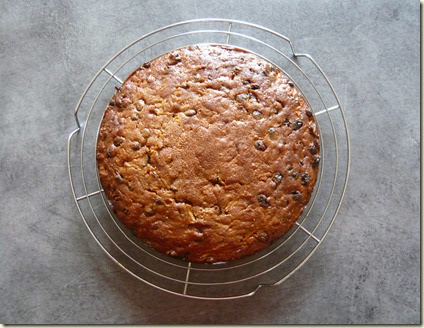 This could easily be the last cake I ever make in my old oven in my old kitchen.  I spotted the recipe in a blog and it was one of those recipes that I felt compelled to make as soon as I had the opportunity. 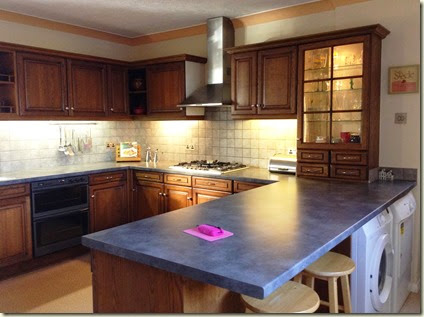 My kitchen, spruced up for the estate agent’s photos.

We’re hoping that it won’t be long now before we move.  It’s eleven weeks since we accepted the offer on our house and with any luck we should move in early June.  I have mixed feelings about leaving the house where I have lived for nearly thirty years, especially about leaving my old kitchen.  Apart from anything else, it’s huge.

The cabinets are old fashioned now but the doors are made of solid oak so we have never had the heart to change or paint them.  They have successfully survived several new worktops, ovens, appliances, revamps and numerous parties, not to mention cooking disasters and triumphs.  But the main issue I have with my kitchen is actually its size.  The space between the two sides is so great that we travel several miles a year just fetching stuff out of the cupboards to cook with!  If we were to stay here we would be thinking about changing it for a more modern design and a tighter layout. 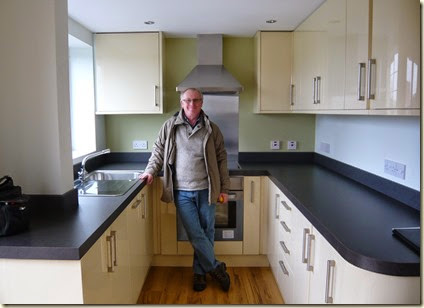 Our new kitchen.  The smile on Nick’s face gave it his seal of approval on the day we viewed the house.

My new kitchen is tiny by comparison.  There are lots of cabinets, but the space is small.  It has a half size dishwasher and a single bowl sink.

The house is a recently renovated between-the-wars semi and the kitchen, like everything else in the house is brand new.  And I have to say, I’m really looking forward to it.  I was born and brought up in a house like this so it felt like a comfy old slipper as soon as I walked through the front door.  To have that familiarity but with a brand new kitchen, bathroom, electrics, plumbing, carpets and everything else is going to be a total joy.  The people who have renovated it have even managed to squeeze a downstairs loo into what was the broom cupboard under the stairs – they deserve a medal for that! 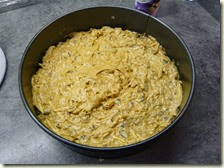 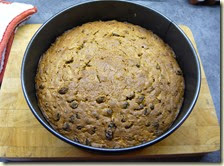 So for my last cake in my old kitchen, I made the parsnip and lemon cake which was delicious.  There are a lot of parsnips in it and, being in a hurry as usual, I made the mistake of grating them in my food processor.  As I tipped them into the cake mixture I realised that they were more shredded than grated.  I looked at the long strands of parsnip in the cake tin and wondered if it would work but it did. 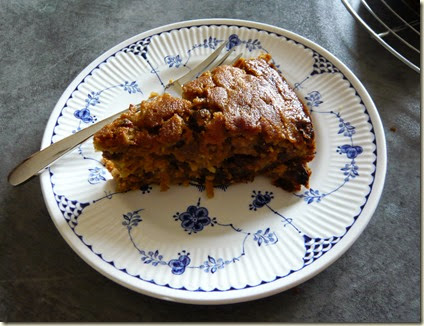 As well as parsnips and lemon the cake contains sultanas, spices and a small amount of cold tea.  That’s something I’m always a bit nervous of putting in a cake but it added a nice slight hint of flavour to this one.

The texture was lovely and it kept well.  If anything it was even better on day two and beyond.  A cake I will definitely be adding to my repertoire and look forward to making again and again.  Even Nick, who doesn’t really like cake that much, enjoyed it so maybe I will make it the first time I bake in my new kitchen!

Thanks go to “The Gentleman Baker” in whose blog I discovered the cake, and you can read all about it and see the recipe here: 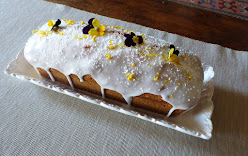